Due to habitat loss and fragmentation, populations of species are isolated which prevents natural dispersal and genetic exchange. In order to prevent inbreeding depression in isolated populations, conservation managers need to simulate the movement of animals by introducing unrelated individuals and by relocating related individuals to other protected areas.

Relocation involves immobilizing an animal (by the use of a dart), carefully moving the animal into a crate and transporting it as quickly as possible to the desired destination to cause as little stress to the animal as possible. If the animal is being transported a long distance it may need to have an extra dose of the sedative to ensure that it does not wake in transit, requiring the veterinarian to be present throughout the journey.

Depending on the sedative that has been given, a reversal-drug may need to be injected into the animal to force it to wake up. 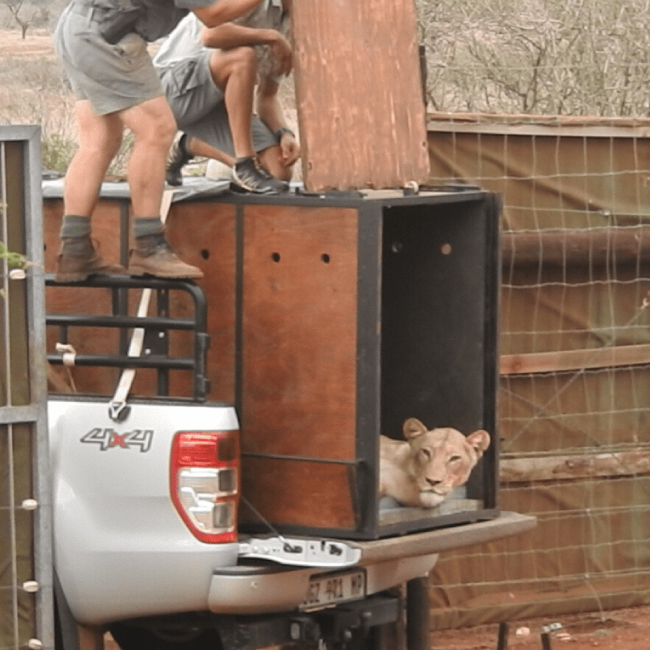 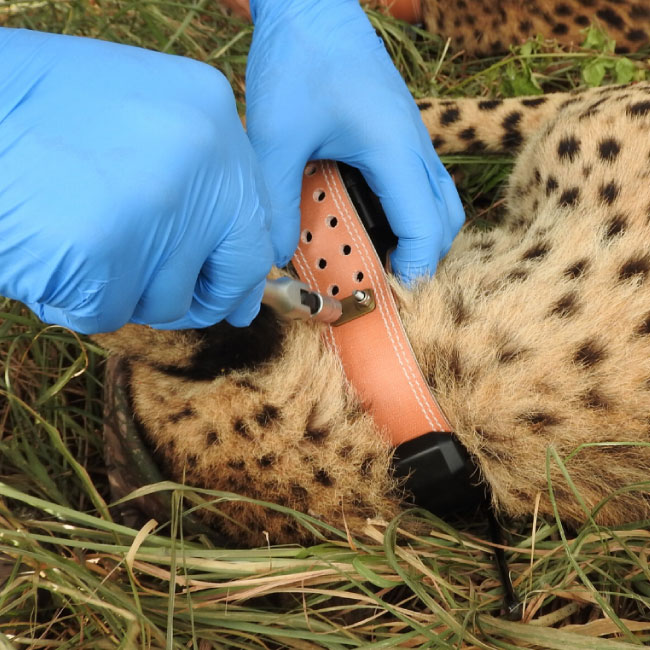 Radio-collaring, notching and branding are effective methods of monitoring threatened species. A radio-collar is placed on an animal in order to track its movements and monitor its activity status. It has become an essential tool in the monitoring of threatened species as it assists conservation managers with identifying human wildlife conflict points, such as when animals leave the boundaries of protected areas or when they are in distress. In addition to this, it develops an understanding of preferred habitat and distribution.

Branding and ear-notching are used for identifying specific individuals in the population. They also assist conservation managers with the population estimation of cryptic species in closed habitats.

A veterinarian is needed to sedate the animal to place a collar on it, brand it or notch it.

Dehorning is the removal of both posterior and anterior horns of black and white rhinos. Rhino dehorning is one of the preventative measures conservationists take to reduce the number of rhinos poached.

Rhino horn is made up of keratin which is the same protein that is found in hair and fingernails. It is sought after for the Asian medicinal market. There are various beliefs of the effects of its use. 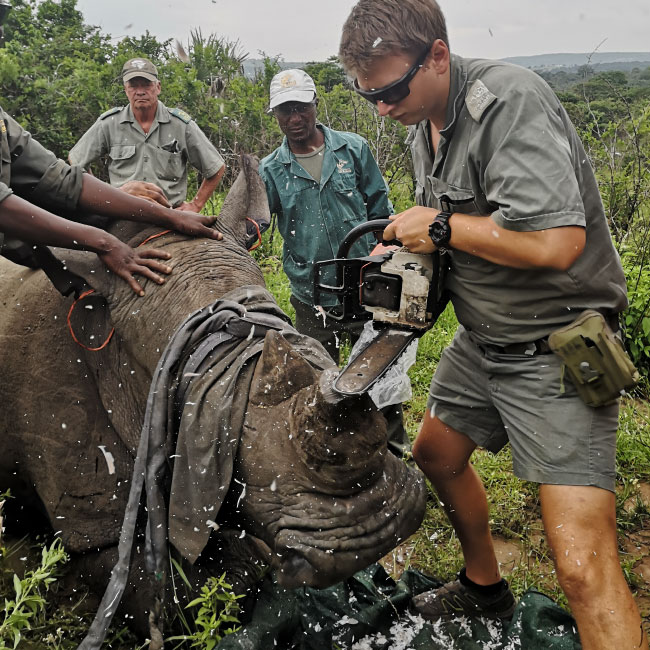 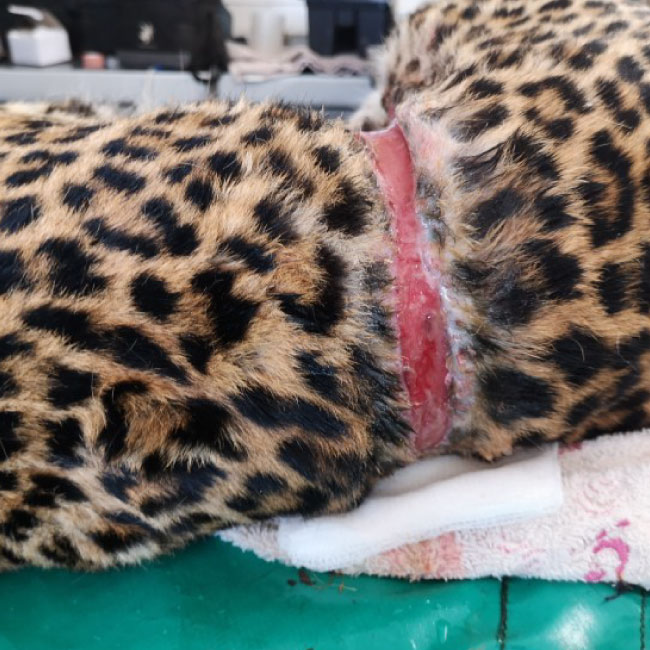 There are multiple ways that animals are injured. Some of these include: snaring, poaching and gun shot wounds and poisoning.

Snaring for bush meat, skins and body parts for medicinal purposes is having an ever increasing impact on the survival of threatened species. Snares are wire or cable traps set out to capture animals and strangle them to death. An animal that walks into a snare will likely try to escape and in doing so allows the wire or cable noose to tighten around it. This could be around its neck, body or legs. Another form of snaring is through the use of gin traps. A gin trap is a spring-loaded metal trap with serrated jaws designed to catch animals by the legs. An animal that has been caught in a snare may need immediate veterinary attention for its survival. It would need to be immobilized (darted), have the snare removed and the wounds treated. In severe cases, the animal may need follow-up treatments.

The rise in rhino poaching has been accompanied by a concomitant increase in the use of fire arms for poaching. The inappropriate caliber and poor marksmanship of poachers, has resulted in a large number of non-fatal gun shot wounds in rhino. Animals need to be immobilised for appropriate treatment to be administered.

Poisoning is increasingly becoming a silent and concealable way of killing wild animals either for the use of their body parts or to illegally control damage causing animals. In some instances the animals are debilitated by the poison and require urgent treatment for their survival.

Occasionally animals escape the boundaries of protected areas and find themselves on farmland or in community areas. Here they can be seen as a danger to humans and livestock and are also at risk themselves.

These animals need to be immobilised by a veterinarian and transported back to the protected area that they escaped from. 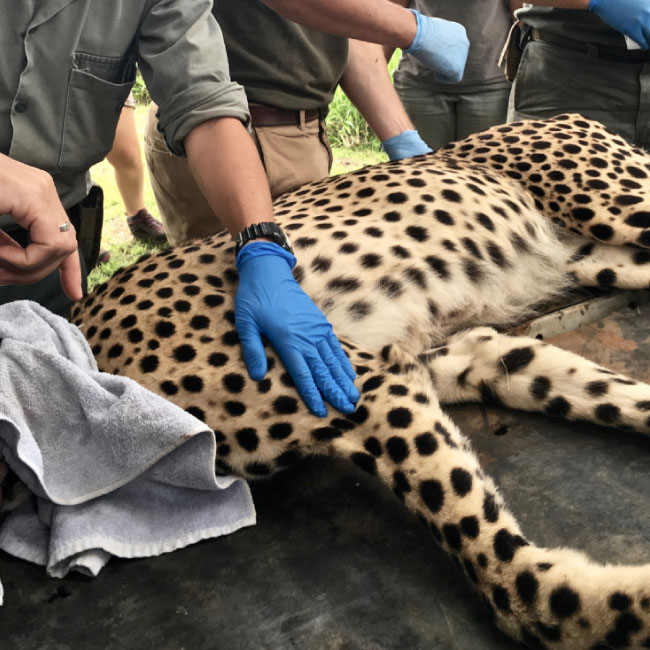 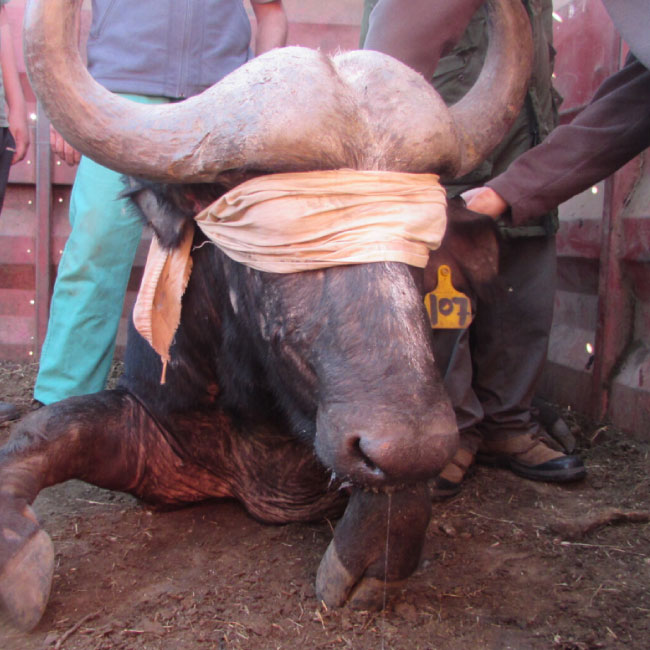 With livestock and domestic animals living in close proximity to wildlife species, disease is easily spread amongst animals and sometimes humans.
There are some diseases which can be prevented through inoculations, such as rabies and canine distemper and others that can only be identified and dealt with when symptoms are presented or by testing animals using various methods.
learn more

One of the many horrific effects of poaching are the rhino calves left behind after their mothers have been brutally killed.
Ezemvelo KZN Wildlife and their very skilled and caring game capture team take on the responsibility of ensuring the orphans survival by giving them the support they need until they are able to function on their own in the wild.
African Wildlife Vets is assisting with the purchase of feed for them.
learn more 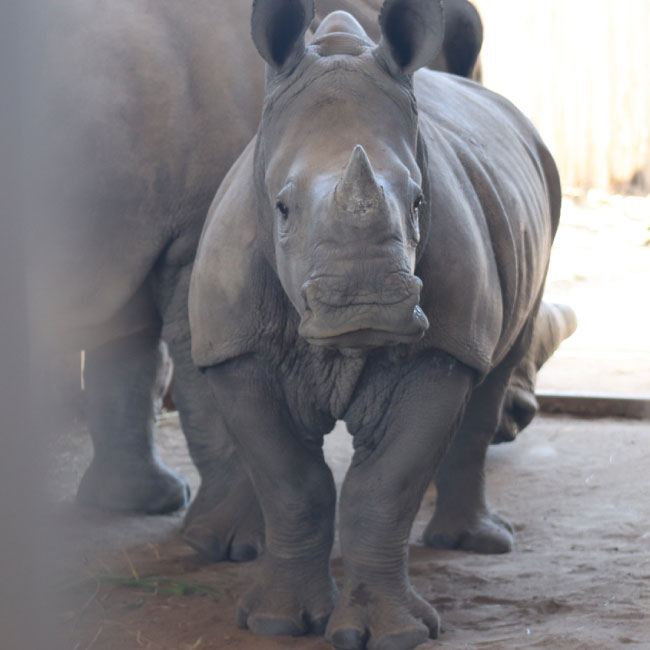 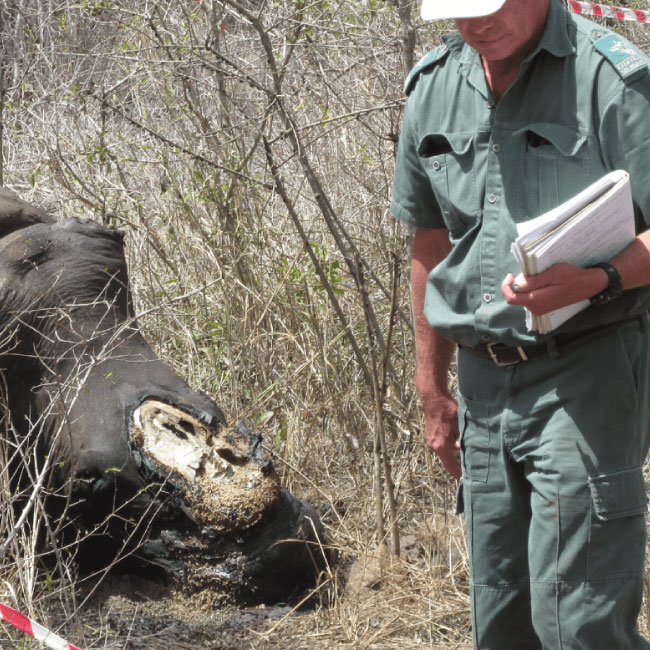 In cases of disease particularly where the disease may be contagious, it may assist with management decisions in terms of vaccinating or isolating animals to prevent the spread of the disease. If an animal has been poisoned, identifying this may lead to an investigation of the source of poisoning and therefore save other animals lives if it is found and destroyed or removed.

Post-mortems can be essential in assisting investigating officers with poaching cases. Poaching is when a wild animal is killed or captured illegally. If the animal has been shot which is often the case in rhino poaching, a post-mortem enables the forensic team to find the bullet.

Our annual report for 2021 – 2022 has been released! Here you can read anything from our financial report to our partners and supporters.